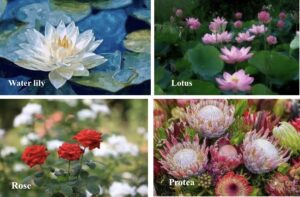 In Rabindranath Tagore’s words, “The world speaks to me in colors, my soul answers in music”.

Wherever Samia has traveled, music has remained an integral part of her life. The national flowers shown above – Waterlily for Bangladesh, Lotus for India, Rose for USA and Protea for South Africa symbolize places which have been home to Samia, where her practice of music has been welcomed and nurtured.

Born in Dhaka, Bangladesh, and a resident of Maryland, Samia Mahbub Ahmad is a Hindustani classical vocal musician in the Kirana Gharana. Samia is the disciple of Padma Shri Vidushi Sumitra Guha, one of India’s premier classical vocalists, and  Sri Tapan Baidya, one of the pioneers of this genre in Bangladesh. Samia has been studying, teaching and performing this ancient music of the Vedic times, live, and on television and radio in North America, South Asia, Europe and Southern Africa for the past three decades. She has earned many awards and recognitions, including, performing for Nobel laureates, Archbishop Desmond Tutu and President Jimmy Carter and Mrs. Rosalynn Carter.

Samia is a full-time arts educator in the Washington DC metro areas, out-of-state and around the globe. Samia’s presentations have taken her to the Smithsonian Institute; the Strathmore Music-in-the-Mansion; the Montpelier Arts Center (as two-time winner of the Classical Recital Series Competition, 2010-12 & 2019); the Atlas Performing Arts Center; the Gandhi Memorial Center (DC), and to many leading universities, in the US, the UK, India, Bangladesh and South Africa.

Samia has also been invited to perform at major religious festivals and prestigious venues in South Asia: the Kumbh Mela (Uttar Pradesh, 2019), the Gita Mahotsav (Kurukshetra, 2018), the Venkateshwara Temple (Tirumala-Tirupathi 2019), the Surya Festival in the premises of the Surya Temple in Bihar (2020), the Kerala Assembly (Trivandrum, 2020), the India International Center (New Delhi), the Edward Kennedy Center (Dhaka), Shilpakala Academy (Dhaka) and more.

Samia has widened her classical base to specialize in Nazrul Sangeet (songs composed by the Rebel Poet of Bengal, Kazi Nazrul Islam), Bhajans (Devotional compositions), and New Age music, melding Hindustani classical music with contemporary melodies and rhythms of South Asia, South Africa, and the West. She has expanded her collaborative work to combine vocal music with dance choreography and the visual arts. An underlying theme in Samia’s performances and teaching is the exploration of spiritual unity in religions that share a common cultural base.

Her published albums, global releases, include “Srijana Chhande” (2003) – a tribute to Poet Kazi Nazrul Islam – and “Rasneem” (2014,) – a tribute to the new generation. These are available on iTunes, Amazon, Google Play, CD Baby and more. In addition, several of Samia’s songs, composed and performed with Ismail Mohammed, one of South Africa’s leading musicians, have been featured in “Tulku: Doors to Paradise” (2007) and “Tulku: The Way of the Mystique” (2009) — both global compilations produced by Grammy award winner, the late Jim Wilson. Her other recordings include sound tracks for the critically acclaimed dance drama, “Sita: Gentle Warrior” performed by the Sutradhar Dance Company (USA) as well as a single, “Vaishnava Janato” released globally in celebration of the 150th birth anniversary of Mahatma Gandhi on October 2, 2019.