Event: The Surya Mahotsav – a three day international performing arts festival in the vicinity of the ancient Surya Mandir. 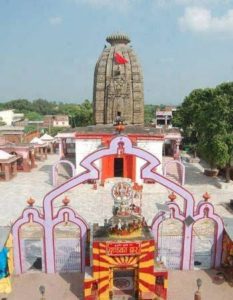 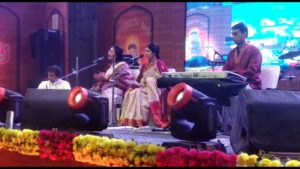 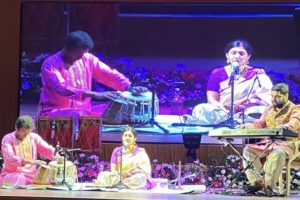 Venue:  In front of the Venkteshwara Temple, Tirumala, Andhra Pradesh.

The full recording of the program on the Sri Venkateshwara Bhakti TV Channel (SVBC). The program begins from the 10th minute of the running time. 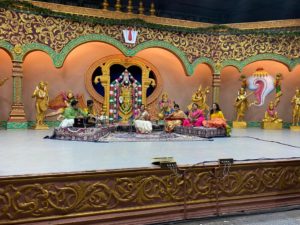 February 21, 2019: A Bhakti offering of Khayal and Bhajans by Samia with her Guru, Padma Shri Vidushi Sumitra Guha. 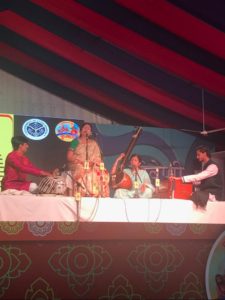 Full-length video of the program: https://youtu.be/wZKl3zSefAg 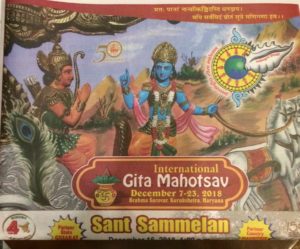 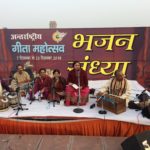 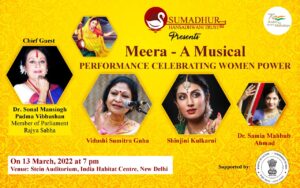 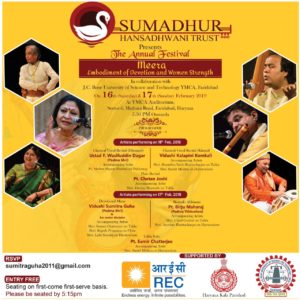 June 17, 2017: Samia’s one hour performance was a confluence of many sentiments. It began with a khayal in Puriya Dhanesree, a dusk raga, that paid homage to the conclusion of a day of fasting in an ongoing month of Ramadan, followed by compositions from the Rebel Poet Kazi Nazrul and Lalon Shah which transcend boundaries.

Event: A 2-day International Conference on “Education Towards Sustainable Development: Lessons from the Kerala Model”. It was jointly organized by the Kerala Government, UNICEF and the Institute of Social Sciences. 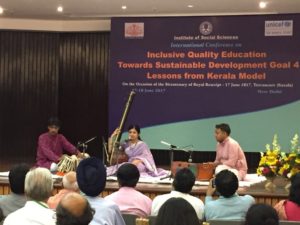 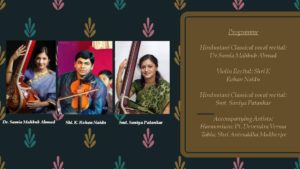 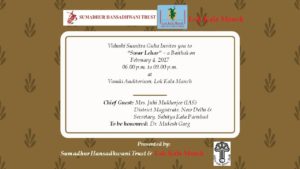 May 21 & 22, 2016: The performance was a confluence of Hindustani Classical Vocal by Samia and Persian Classical Instrumental music by Rana Shieh (music instrument: Kamanche) and tabla by Debu Nayak.

Event: A 2-day International Conference titled “Intellectuality & Spirituality in the Islamic Tradition: A Prelude to the Perennial Philosophy. 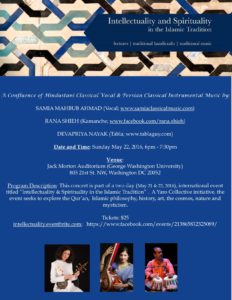 November 21 & 22, 2015:  A world premier of “Sita Gentle Warrior”, a global classical music and dance drama. This production of music, dance and spoken words is a re-telling of the story of Sita, daughter of Mother Earth, canonized as the ideal woman, one who represents the timeless quest of women to be free of socially imposed gender discrimination and oppression. Derived from the epic Ramayana, the story offers a fresh perspective to this character that resonates with both men and women across time and culture.

The production was a collaboration of international artists. 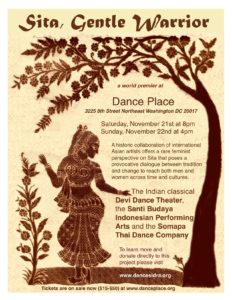 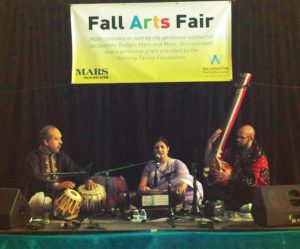 November 23, 2014. At the residence of South Africa’s ambassador to the US, Ebrahim Rasool.

Event: In conjunction with the Asian Arts & Culture Center’s visual arts exhibition, “Meditation”, this was a solo presentation by Samia Mahbub Ahmad on music and meditation. 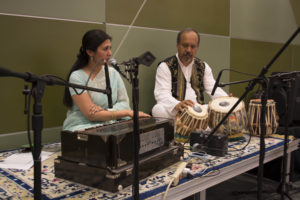 Sponsored by: The Association for India’s Development at the Johns Hopkins University. http://www.aidjhu.org/

February 23, 2013, Saturday, 4-5 pm: Samia presented a duet (jugalbandi) of Vocal and Sarod with Soumya Chakraborty, an intersection of vocal and instrumental.

Event: The INTERSECTIONS: A New America Arts Festival, Feb 23 – Mar 11, 2012. The goal of the festival was to celebrate crossing boundaries of language, genres, generations, race and ethnicity. 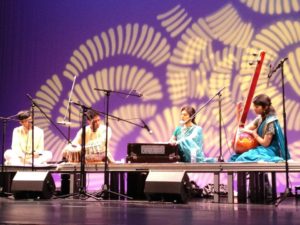 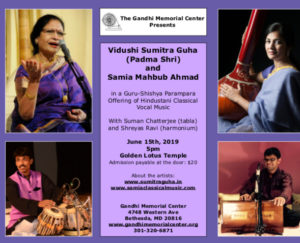 December 8, 2009: A joint presentation of Hindustani Classical music with Srimati Karuna, Director of the Gandhi Memorial Center for retired individuals aged 75 and above.

Event: A Performance for the Women’s Committee of the Washington DC Performing Arts Society.

November 8, 2007: Samia’s selected songs reflected the various manifestations  of the “Landscapes of Bengal” depicted in visual artist Nasima Khan’s artwork. The music reflected seasonal cycles, Monsoon, Spring and Summer and how these are integral to those whose lives – through joy and loss – are inextricably intertwined with nature.

Event: A multi-media presentation titled “An Interpretation of the Visual Art through Music” for the members of the National Society of Arts and Letters (http://www.nsalwashington.org/)

Event: A presentation titled “The Islam/West Divide and India’s Role: Hints from the Mahatma”, by Rajmohan Gandhi, grandson of Mahatma Gandhi.

September 15 & 16, 2018:  In celebration of the iconic work of the Rebel Poet of Bengal, Kazi Nazrul Islam, Samia. along with artists from all over the world gathered to perform his creative work at the 17th North America Nazrul Convention.

Co-sponsored by:  DROOPED & the Bangladesh Association of America Inc. 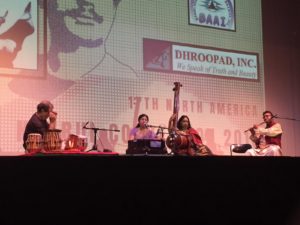 May 7, 2017: A solo performance at fundraising concert organized by Hridoybeena. 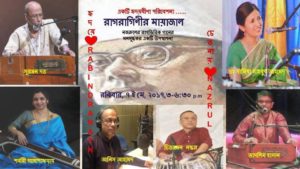 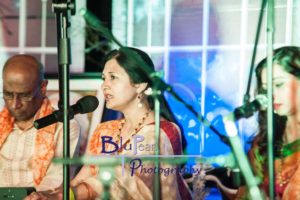 May 24, 2014: A solo performance in celebration of the 115th Birth Anniversary of the Rebel Poet of Bengal Kazi Nazrul Islam. 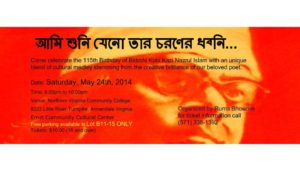 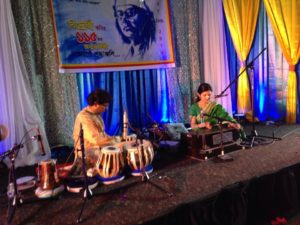 November 4, 2006:  A solo presentation of Classical and Nazrul compositions.

Event: In celebration of the iconic work of eminent poets and composers of Bengal – Kazi Nazrul Islam, Rabindranath Tagore, Atulprasad, and Rajanikanta Sen and how each genre has been inspired and informed by Indian Classical music.

September, 2004: A solo Bangla music performance by Samia to celebrate the diversity of the creative work of the Rebel Poet of Bengal Kazi Nazrul Islam. The concert was attended by high level politicians, officials of the Government of India and representatives of various embassies.

Hosted by: The High Commissioner of Bangladesh to India, His Excellency Hemayetuddin Ahmed and Begum Zeenat Jahan

February, 1998: Samia presented a solo Hindustani Classical, Bhakti, Sufi and Folk music performance. The concert was attended by high level politicians, officials of the Government of South Africa and representatives of various embassies.

Hosted by: The High Commissioner of Bangladesh to South Africa,  His Excellency Tariq Karim and Mrs. Naghma Karim.

September, 1997: Samia was one of three solo performers of Hindustani Classical Vocal and Instrumental music.

June 4, 2011: A Hindustani Classical performance for a predominantly non-Southasian audience.

June 2, 2012: A Hindustani Classical performance for a predominantly non-Southasian audience.

June 2, 2013: A Hindustani Classical performance for a predominantly non-Southasian audience.

June 10, 2010: As recipients of the Master/Apprentice Grant Award of the Maryland State Arts Council, Samia (Maryland Master) and her daughter, Irum (Apprentice) were invited to perform a vocal-violin duet in the Hindustani Classical genre. 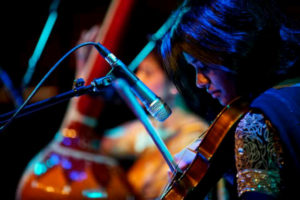 June 18, 2011: A Hindustani Classical Solo Music Performance in recognition of this genre as part of Maryland Traditions of the Maryland State Arts Council.

September 26, 2009: As a selected artist of the Artists and Scholars Roster for Community Programs of the Arts and Humanities Council of Montgomery County, Samia was invited for a Solo Nazrul Sangeet and Devotional music performance.

April 24, 2010: A performance organized by the Arts and Humanities Council of Montgomery County’s Montgomery Traditions program at the first ever Amnesty International Human Rights Art Festival.

TWO FUND-RAISING PERFORMANCES organized by SAMHATI (http://www.samhati.org/). a USA-based non-profit Bangladeshi women’s organization to support projects to improve the social and economic conditions of women and children in Bangladesh.

February 12, 2011: In celebration of Saraswati Puja, Samia performed in a live ensemble for a classical dance presentation by Radha Dutta. 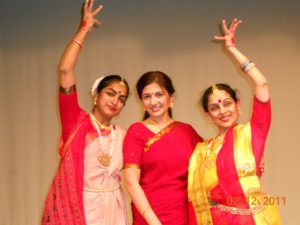 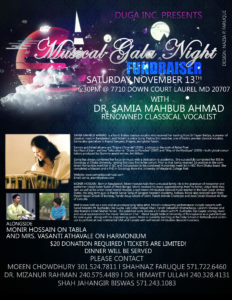 Event: A Hindustani and Carnatic Music and Dance concert organized by The University of Virginia Hindu Student Council for the East West Foundation of India – a charitable and educational foundation for health care, child welfare, and child education.

November 16, 2007: A Solo Devotional and Folk music performance by Samia on the theme of  “Spirit of Unity Underlying Cultural, Ethnic, Religious and Lingual Diversity in South Asia”.

Event: A two-day conference, titled “India and the US: Common Challenges and Opportunities,”

Organized by: The Office of International Programs India Working Group.

Co-sponsored by: The College of Agriculture and Natural Resource, the Center for International Business and Research (CIBER), and the School of Architecture, Planning and Preservation, The University of Maryland, College Park, USA.

October 17, 2006:  A concert held in recognition of “India Day and UN International Day for the Eradication of Poverty”. 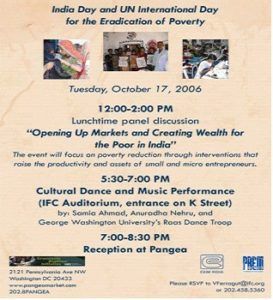 Hosted at: The residence of  Inji Islam and Salman Zaheer. 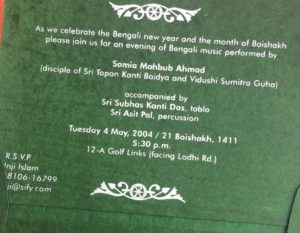 Hosted at: The residence of Jahangir and Shamima Khan. Lutherville, Maryland, USA.

December 3, 2005: “Music for the Soul” – a Hindustani Classical music concert.

Hosted at: The residence of Karuna and Husain Choudhury. Potomac Falls, Virginia, USA