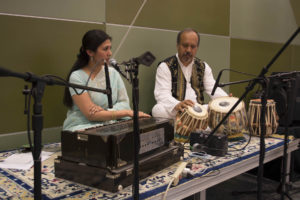 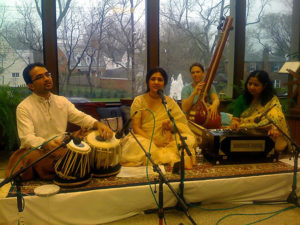 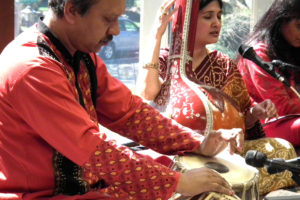 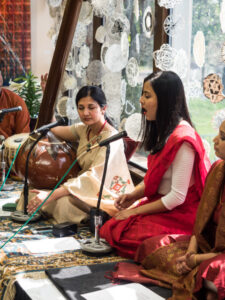 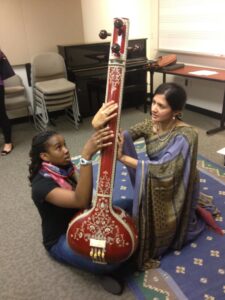 Samia teaches Indian Classical music in both the traditional ‘Master-Apprentice’ style as well as mainstream workshops and lecture-demonstration formats at schools (grades K-12), universities, libraries and community organizations in the Greater DC metro areas and beyond. In parallel, over the last decade, she has been teaching students worldwide virtually using the web. During the ongoing COVID-19 pandemic, for Samia, the use of the virtual medium to teach Hindustani Classical music has grown significantly.

Samia’s longest-standing lecture-demonstration series, since 2009 till current, has been for a course titled: “India: Culture, Traditions, and Gandhi” offered annually at the Gandhi Memorial Center for members of the Osher Life-long Learning Institute (OLLI) of the American University, USA. The Osher participants are retired individuals aged 70-years and above.

Samia also offers lecture-demonstrations specially designed for young audiences. For example, in 2009, she presented a program for 125 kindergarten students at the Collegiate School, Richmond, Virginia during the school’s South Asia Awareness Month. The same year, at a special program for young children conducted by the Gandhi Memorial Center, she presented compositions from a variety of South Asian poets/composers such as Kazi Nazrul Islam, Lalon Shah, and Tulsidas. In 2002, she conducted a 5-day workshop titled “Application of Indian Classical Music in Fusion Music” held at the American Embassy School, New Delhi, India.

Samia firmly believes that no matter one’s academic discipline, the arts are an integral part of education. Performing and teaching Hindustani music helps Samia to challenge all her students  and audiences to think globally and connect locally.